Today we reach the top of the castle and capture its one but mighty door.

This week happened so much, considering!

Two days ago I found the first poppy of the year and today I saw that it was already gone. Was it the wind or the hand, I wonder. I captured poppies #2, yet to unfurl, and #3, both of which are yet to be posted. The poppy post includes a special photo that my father sent me from Slovenia, of a table and benches that he repainted. How inviting.

I found an unlikely beach scene and used it for my first Wordless Wednesday. Only later I connected it to the blindfolded woman being led to the beach by a friend. I spotted this duo as I was leaving. Come to think of it, there were a number of people on the beach, as if waiting… Is somebody getting married?

And now to the doors. Last week we started the tour of the castle town Torre Alfina in Lazio and today we reach the top of the castle with a single but rather particular door.

You shall see how this photographer cautiously approaches a door in the wild from several directions before she pounces.

And then the only thing to do was to go down again, seeing that the castle was shut tightly. A wide road for the cars was leading down, which I previously didn’t see at all. As I descended I was able to choose which door to buy. Then I reached the castle gate and returned to the town, which is what awaits us next Thursday.

Let’s go then, there is nobody around and I could really use some human company. 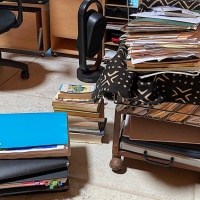